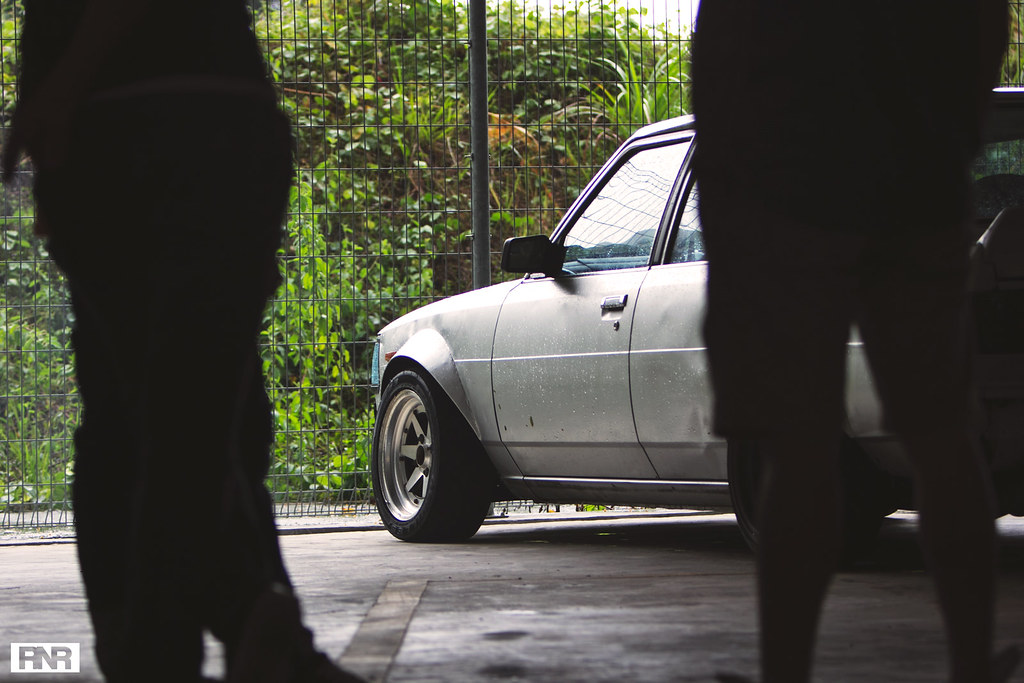 In Malaysia cars are expensive to own, everyone who's lived in Malaysia knows that. However that means there are less spoilt brats driving cars that they don't deserve. We've seen plenty of videos of really expensive cars crash and burn. Granted cheaper cars crash and burn too but us less wealthy folks go above and beyond to not crash our cars as it equates to a heartbreak equivalent to a failed relationship. 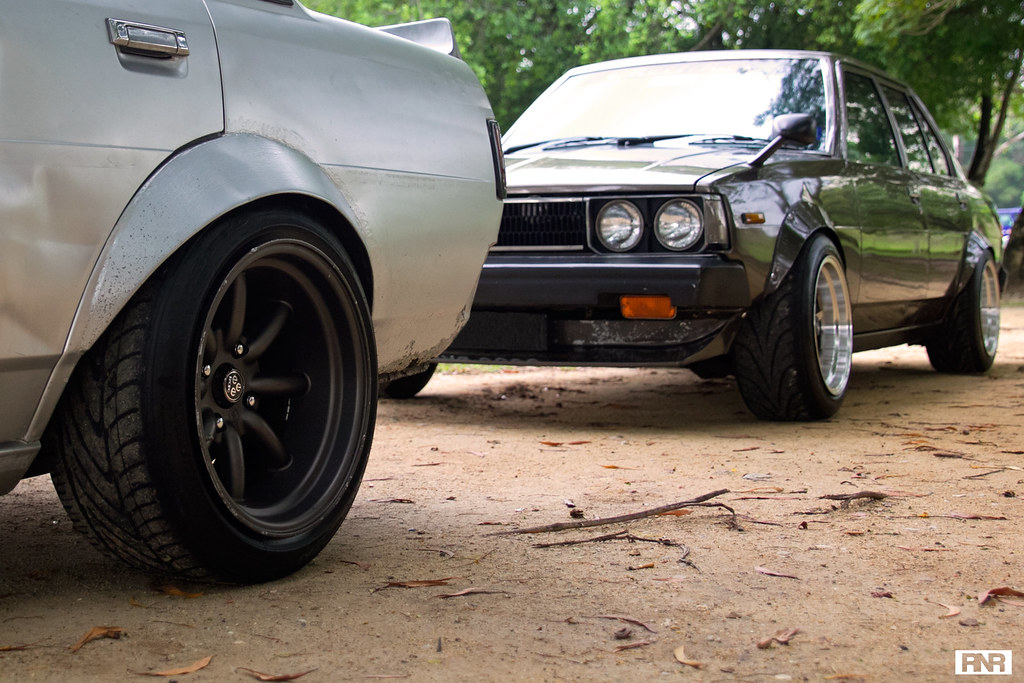 Whilst I'm digressing, my point is that cheaper cars (and usually older cars) get more appreciation than what the general public think. Malaysians are made up of mostly middle-incomers, thus making cheap and cheerful cars more desirable. The venerable Toyota KE70 probably tops the list of wants for many car enthusiasts out there for its light RWD chassis as well as its robust 4AGE engine. You might scoff at how old the KE70s are but bewarned - they are not to be underestimated.

Much like the AE86, the KE70 was designed with a RWD platform with the 4AGE engine. Unlike the AE86, there are more KE70s lurking around Malaysia. The more desirable ones are of course those equipped with 4AGEs, there are some economical 4K engined KE70s on the road too so make sure you buy the right one if you're in the market for one. Fortunately Malaysia has proficient mechanics that do engine swaps like our earlier featured SR20 powered RX8. This particular aerosol-can-painted Silver KE uses the more modern younger cousin Altezza engine for added dynamism! 3SGE swaps aren’t uncommon nowadays especially outside of Malaysia.

But that doesn’t mean the 4AGE is insufficient and unloved. More on that later in our next feature. 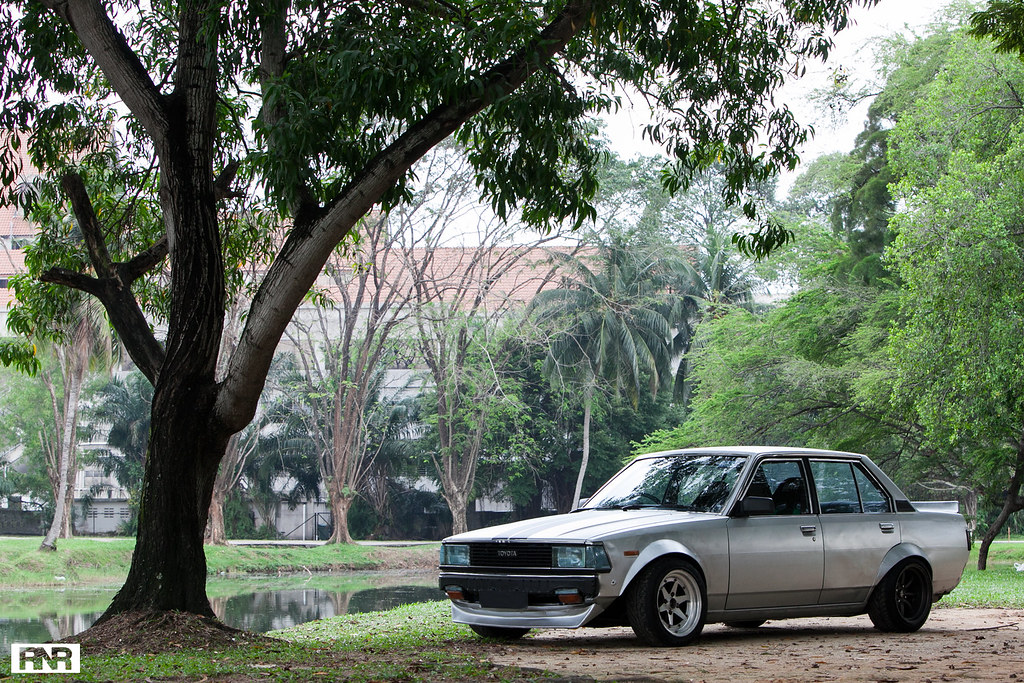 This KE70 was driven by an elderly uncle for several years before Kenn bought it over. Like any age-old car, it had rust patches at the bottom rear quarter panel, but the chassis itself is in mint condition. There is a saying that once you go rear wheel drive, you'll never go back - Kenn would say once you go KE70, you'll never go back. This is his second KE70 and interestingly, the first one was running a naturally aspirated SR20. Unfortunately the owner passed away, Kenn couldn’t legally register the car so in the end, he sold the KE for spare parts, then moved on to a 1JZ powered Cefiro. The Cefiro was a handful and required a lot of attention and money, hence he sold it off and went back to his first love - the KE70. 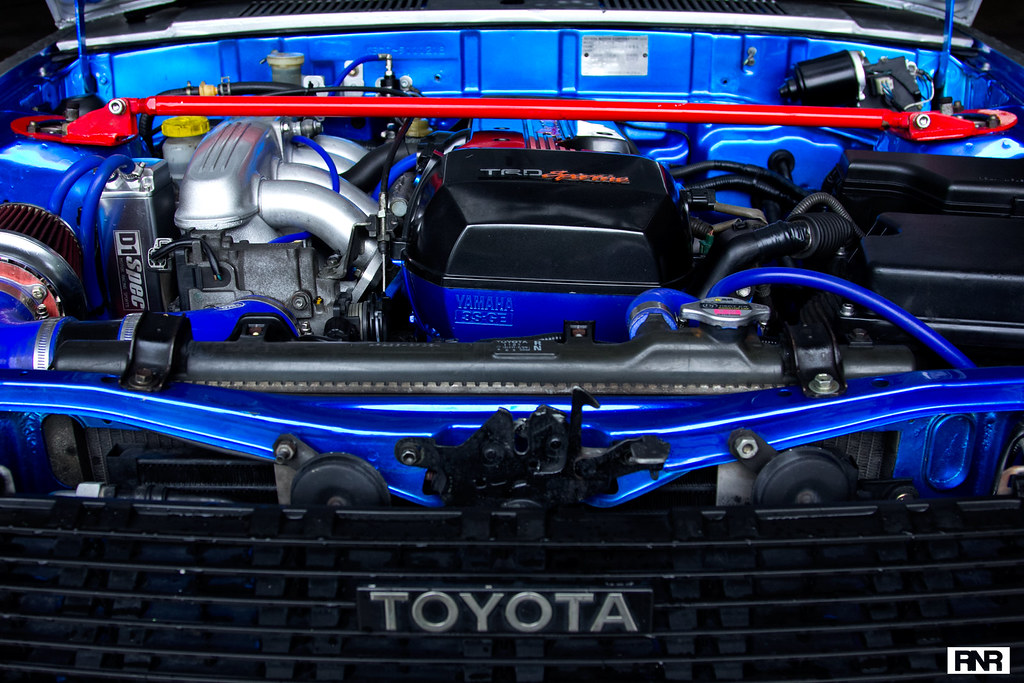 For his 2nd KE70, he had everything stripped down and the bare-bones car was sent to JT Auto for the full modernization process, fortunately for me the garage owner Jacky was nice enough to allow me to take some pictures of the build. Kenn wanted to keep the outlook as plane-jane as possible, so he used rattle can spray paint instead. He told me that he literally passed 2 cans (each) of the spray paint to 5 friends and they just sprayed there and then, just like that. He didn't care to do the paint properly because his old Cefiro scraped the barriers a lot during drift events effectively destroying his shiny new paintjob. The engine bay was resprayed with a super glossy blue though and the glossiness will literally blind you under the sunlight! Even the engine and components are painted with the same colour. JT Auto did a excellent job fabricating the interior, engine mountings as well as tidying the wires and hoses. 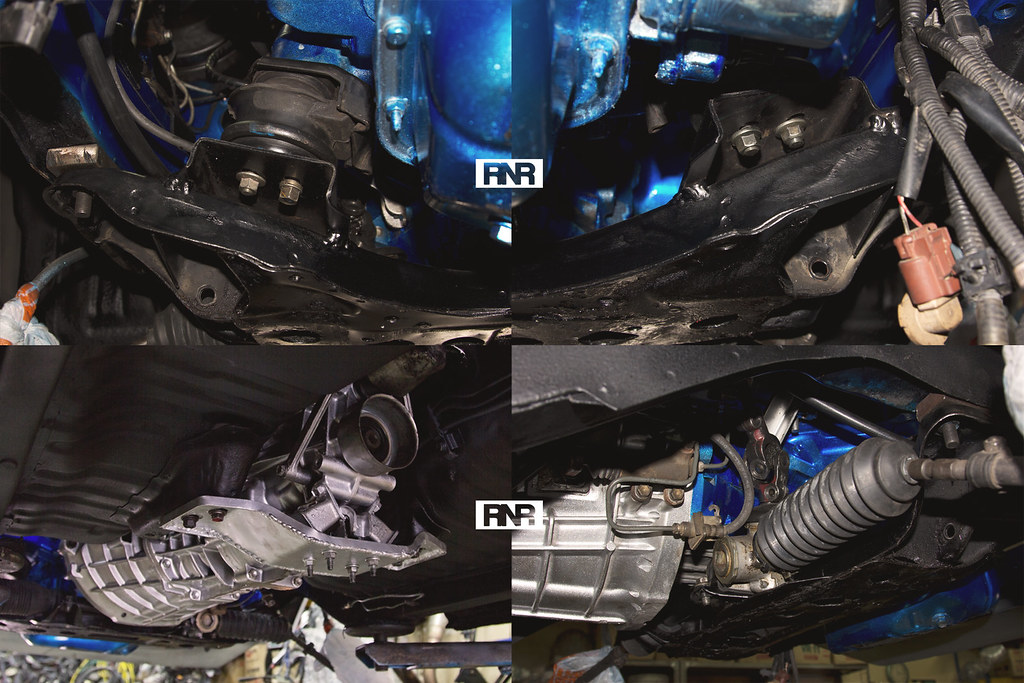 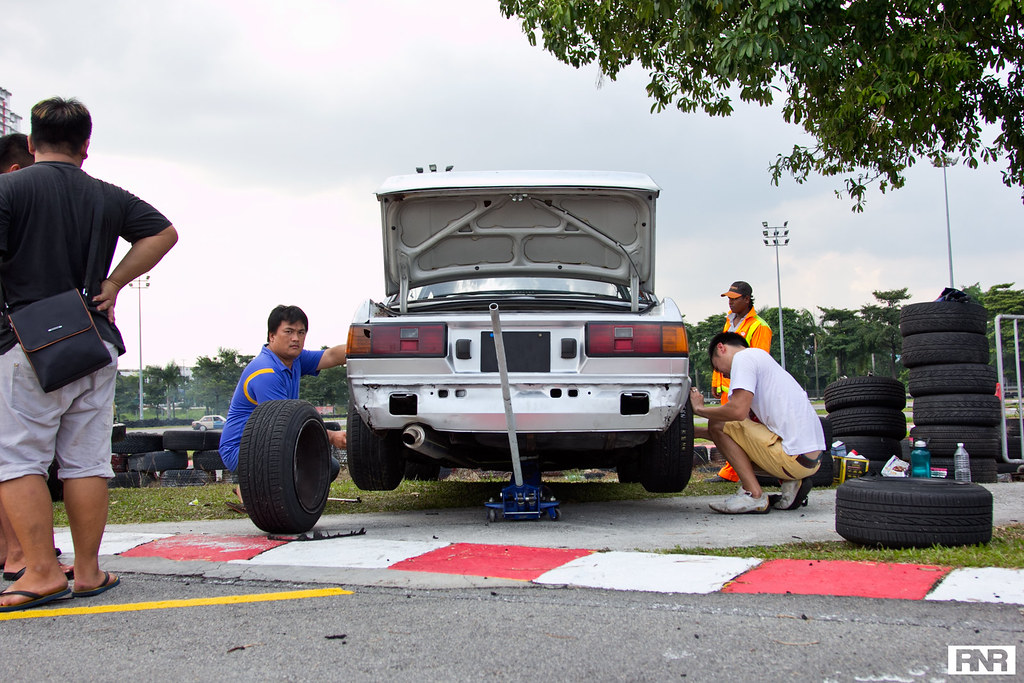 The rear was customized by first discarding the factory live axle/IRS and retrofitted the entire AE86’s suspension components together with the 2-way LSD 4.6 final drive. 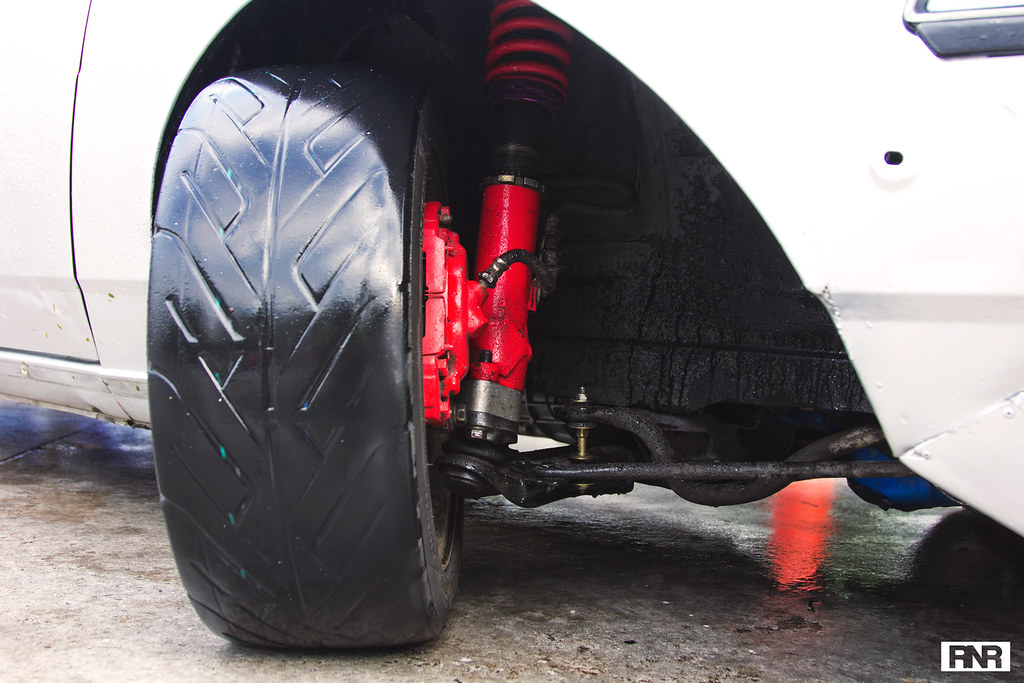 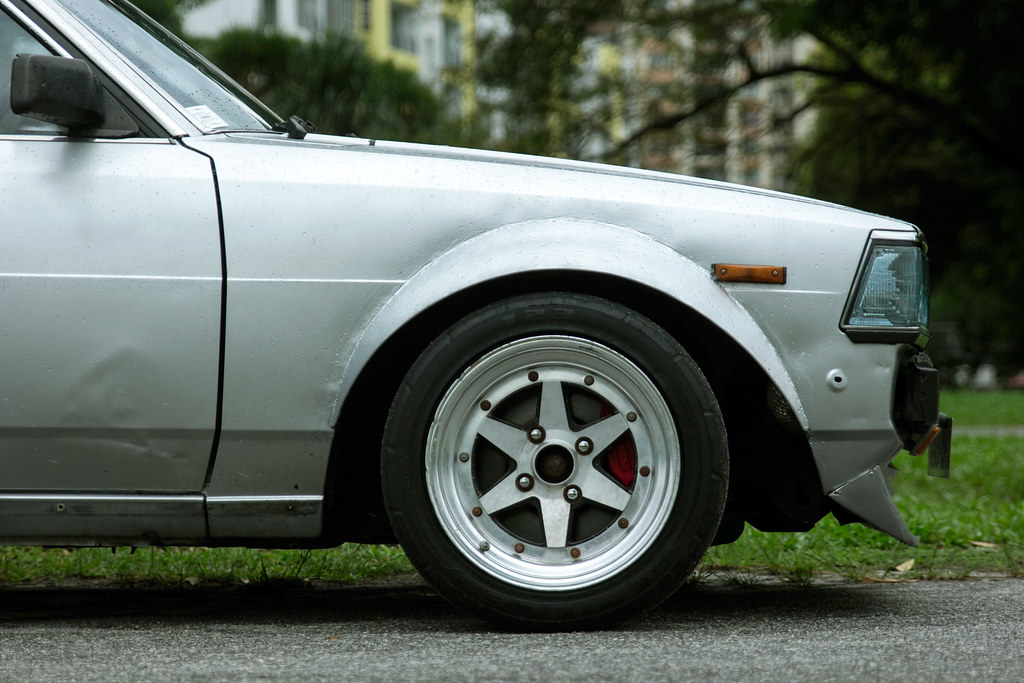 Drifters use a lot handbrakes but this car will to be driven on the track as well so everything had to be perfect. The brake system was fully upgraded with modern car parts too - 4 pot front calipers from a FD3S and the rear was from a S14, enhancing 'foot power' is a S14 Double Layer Servo to provide extra braking bite. The FD3S 4-pot calipers are one of the smallest out there, used on purpose so he can clear his gorgeous old-school 15 inch wheels. Notice the handbrake lever? Its welded from an old control arm! Antiquated and charming! 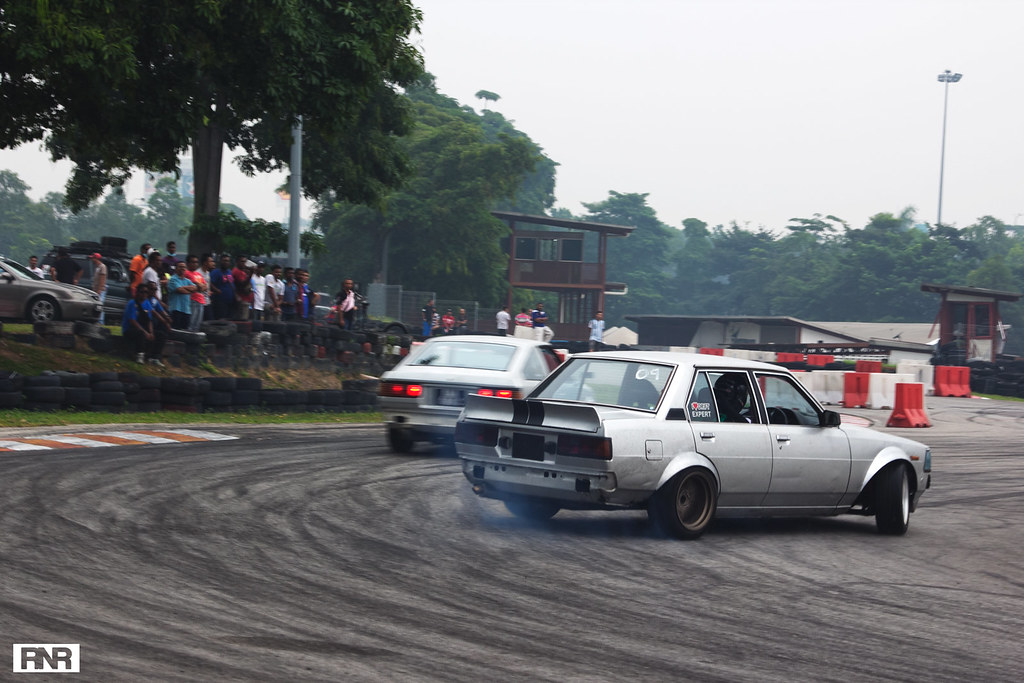 The drifting scene is getting smaller but the community is getting tighter. I personally love the sport (drifiting) and I hope everyone will not stop drifting.