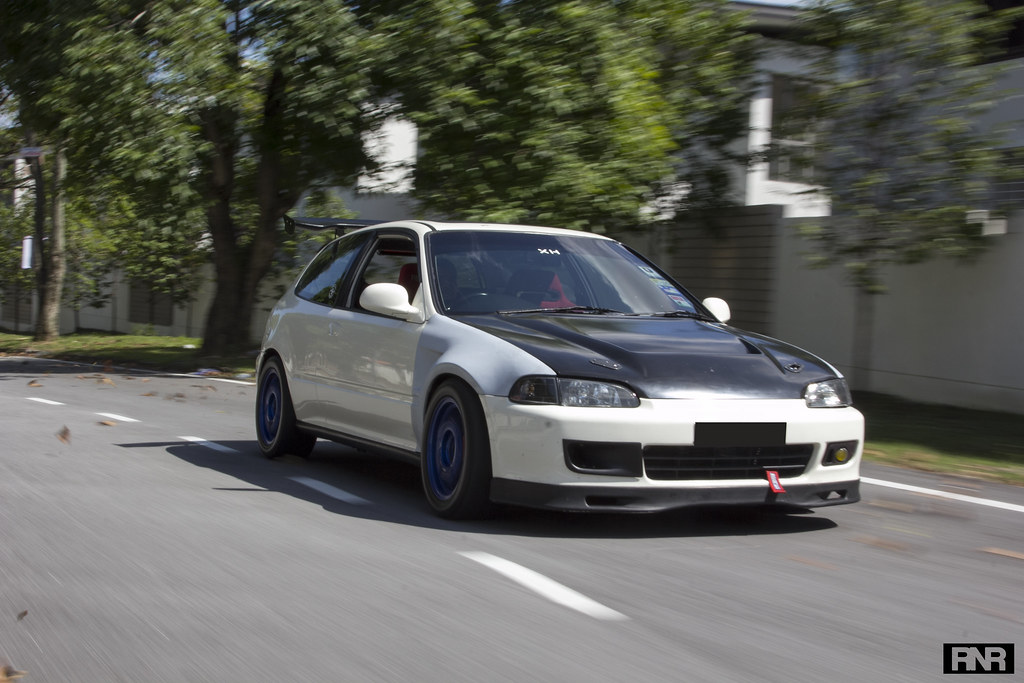 ban·shee
ˈbanSHē/Submit
noun
(in Irish legend) a female spirit whose wailing warns of an impending death in a house. 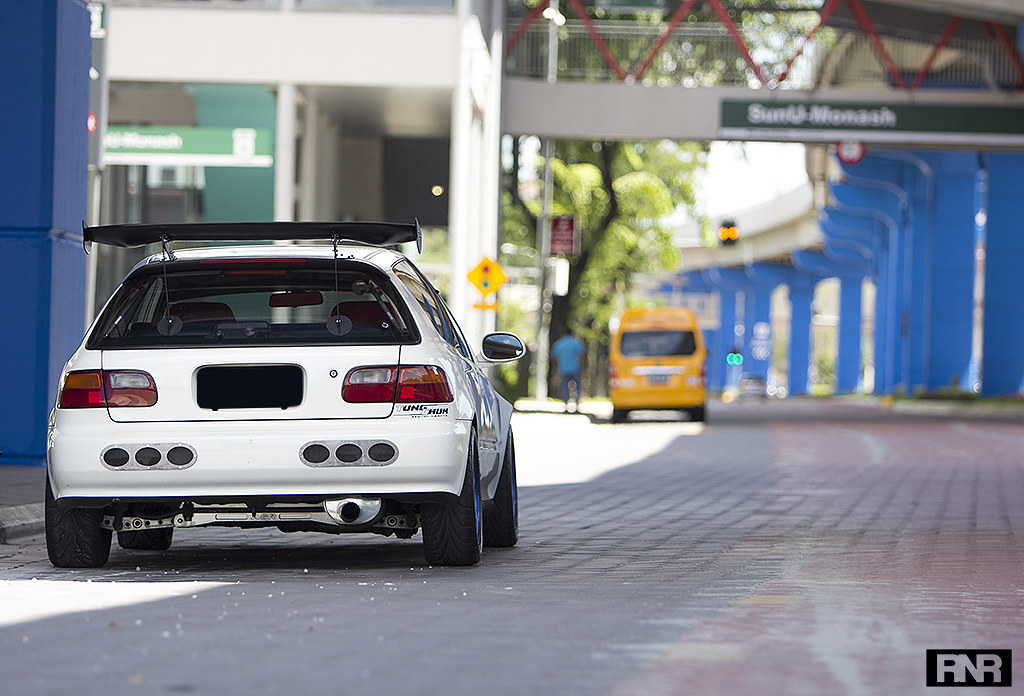 RNR has covered a whole variety of banshees, a supercharged whining banshee (S2000), a rebuilt banshee (EF), a clutch bell ringing banshee (EK), the new and improved banshee (FD2R), the hybrid banshee (CRZ) and a track oriented banshee (DC5). Now with this pretty example of an EG aptly nicknamed the Banshee, I'd like to ask if there are any NSX owners out there that would like to help RNR complete the collection? 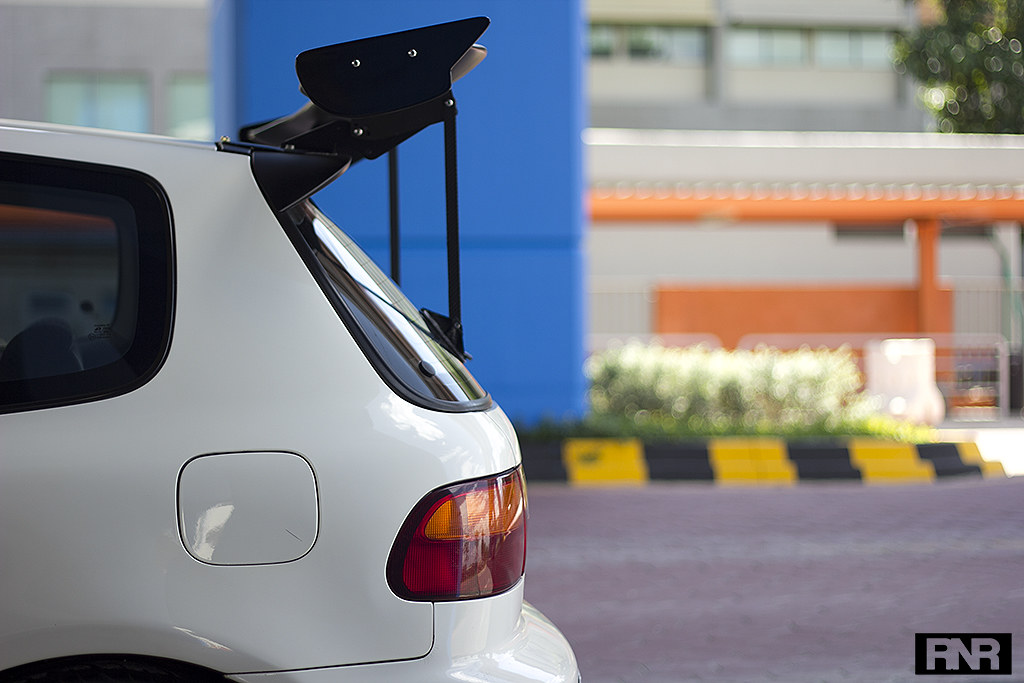 Why a 'banshee' you say? The infamous VTEC engine (when VTEC is engaged) is very well known for it's screaming capabilities, so much so it's been known to pound fear of death into the minds of owners once their cars jump into break-neck speeds. The louder, the better, the more fear, the more speed. Much noise, such speed, very acceleration. It's noteworthy that the Hondas we've all featured were from the yester-year (except the FD2R) and cars from back then all had one thing in common. They either had lots of power, or very little weight. 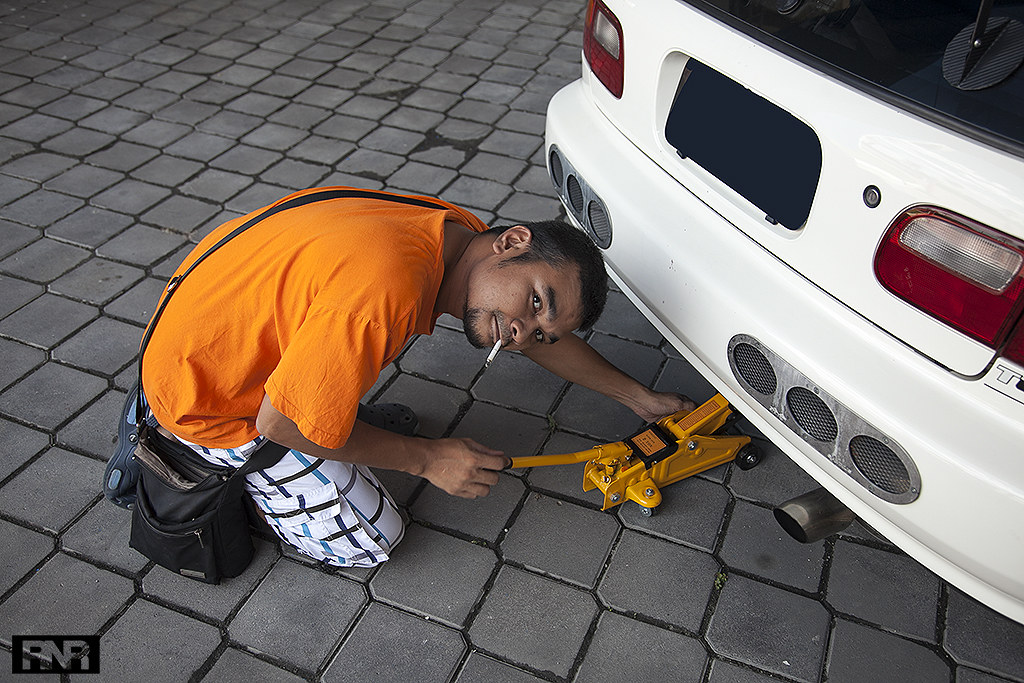 The Honda Civic EG Hatch is barely a tonne (curb weight) and Izrin's car originally came modified with a B20 and made 185hp on the wheel with 18kg/m of torque, pretty respectable. Except it didn't survive Izrin's track handling at SIC (Sepang Internation Circuit) and he managed to kill the engine twice with the second being his own goof-up when he redlined without first checking and adjusting the newly replaced distributor. 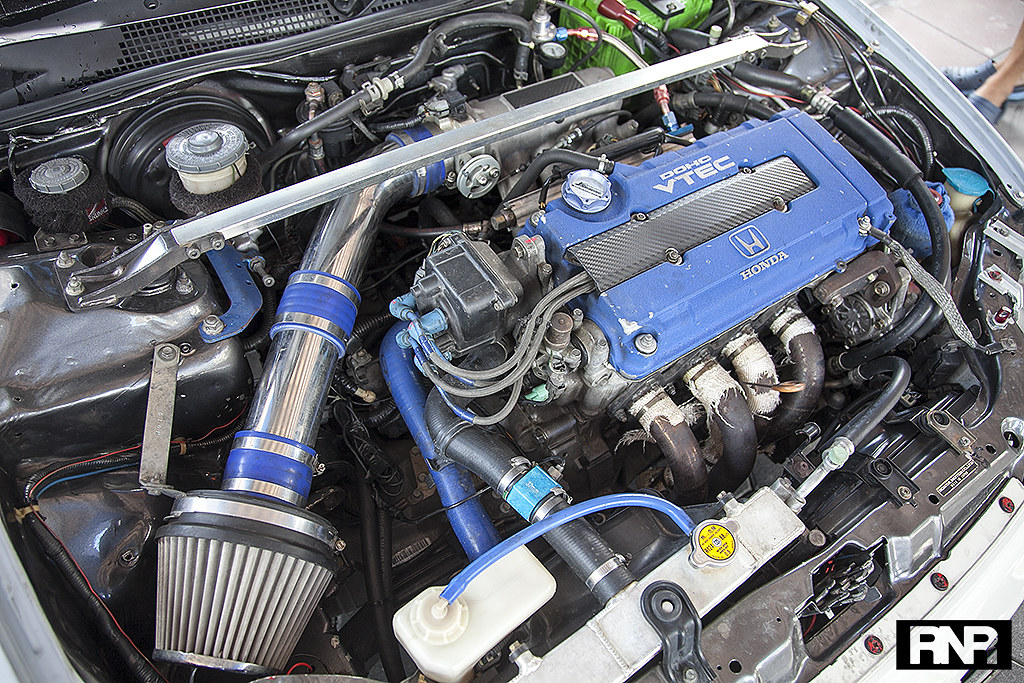 Finally settling for the cheaper B16A, it still made a pretty respectable 157hp on wheel (with 15kg's of torque), meaning the little pocket rocket was still able to launch off the line at highly respectable speeds whilst handling corners quite easily with a dab of handbrake and lots of controllable under/oversteer (anyone seen the Initial-D anime race between the hero and the red EG?) 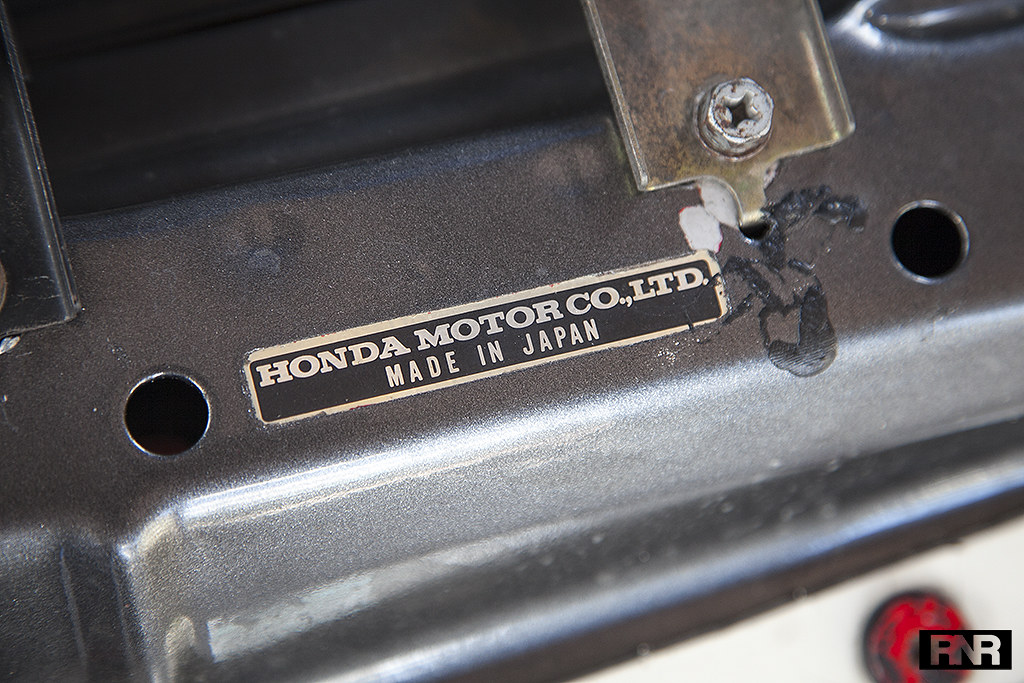 Having reached his realistic milestones of marrying his girlfriend and having a kid of his own, Izrin only had one other milestone he wanted to achieve - to own his childhood pin-up car, the Honda EG. Yes you heard me right. When the 'family oriented' Civic EG was first launched (it has an extremely practical split tailgate), it was too expensive for the back-then young Izrin to buy and now that he's working and has cash readily available, the EG was selling for dear amounts of money even though it was 20 years of age! Pristine examples of the EG would sell for obscene amounts, RM40k to RM60k (USD9k to USD14k) cash since it was too old for banks to approve loans. So Izrin settled for the cheaper EF. It was by chance a friend of his offered a good deal on a EG the friend had that he finally bought the car of his dreams. 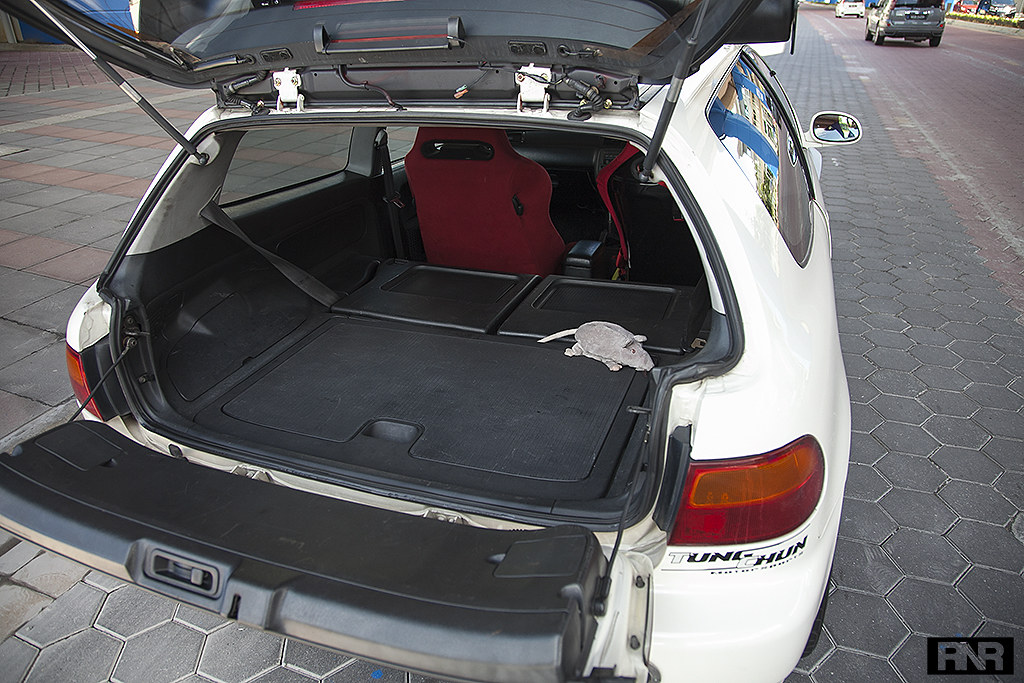 Sitting pretty in white, it was easily the easiest car RNR has ever featured. White balance was easy, the extreme sunlight didn't mess with our camera sensors and everything was in focus all of the time! Long live white cars! 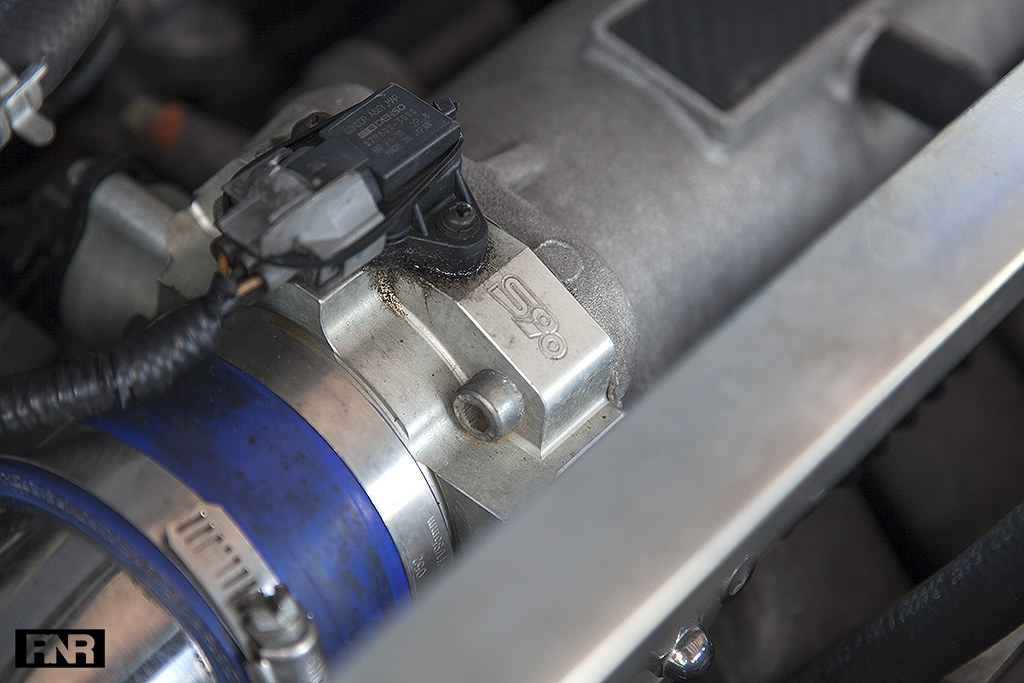 Being only a weekend car, Izrin has gone to great lengths to making the car as track-worthy as possible. With simple mods such as the aero-mods on the car, they help to shave off those precious seconds on track. Less-simple mods such as the GSR cams in the engine, DC2 Type-R S80 gearbox with LSD and custom exhaust ensure the engine ploughs through those corners as quickly as possible and complicated-mods such as the anti-roll bars, Tein Flex coilovers, handling kits and hardcore bushings ensures Izrin's balls stay large when he dives the 'Banshee' into a corner at break-neck speeds. 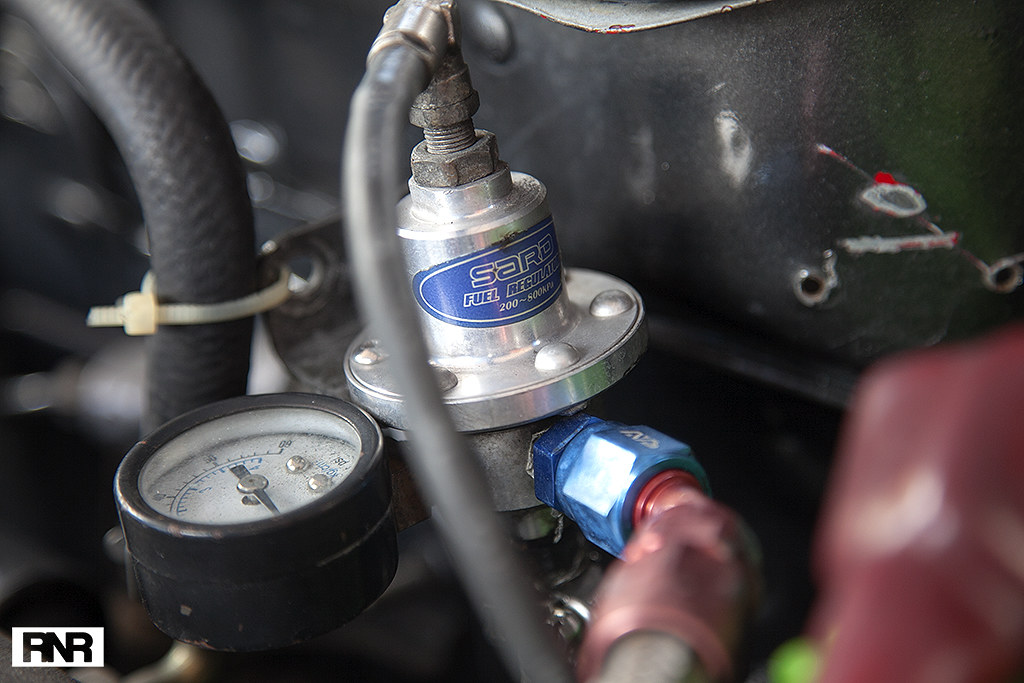 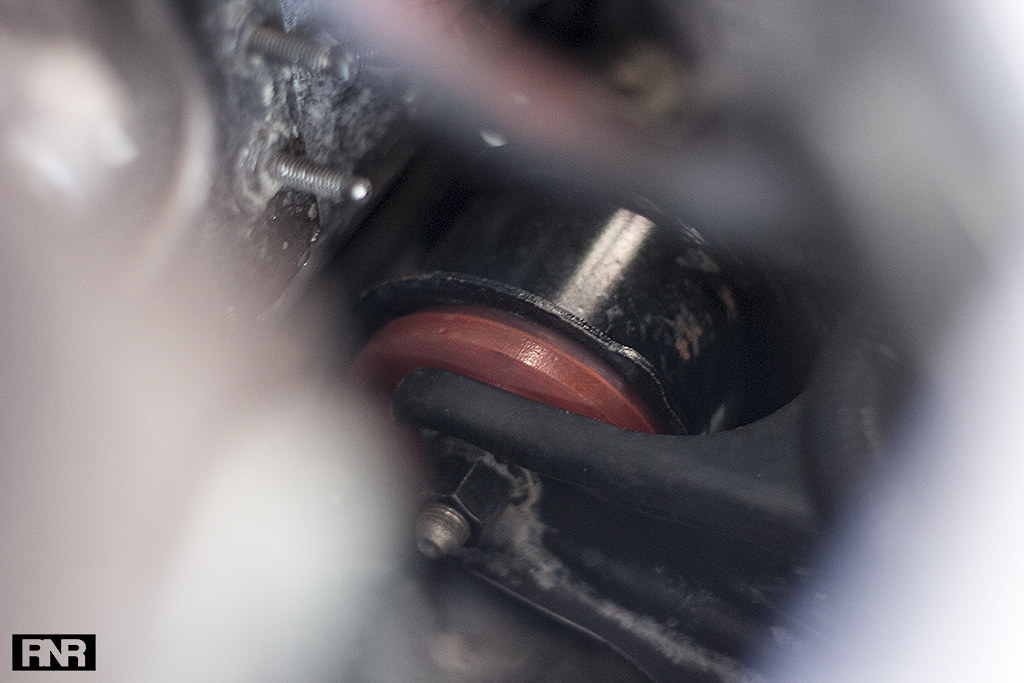 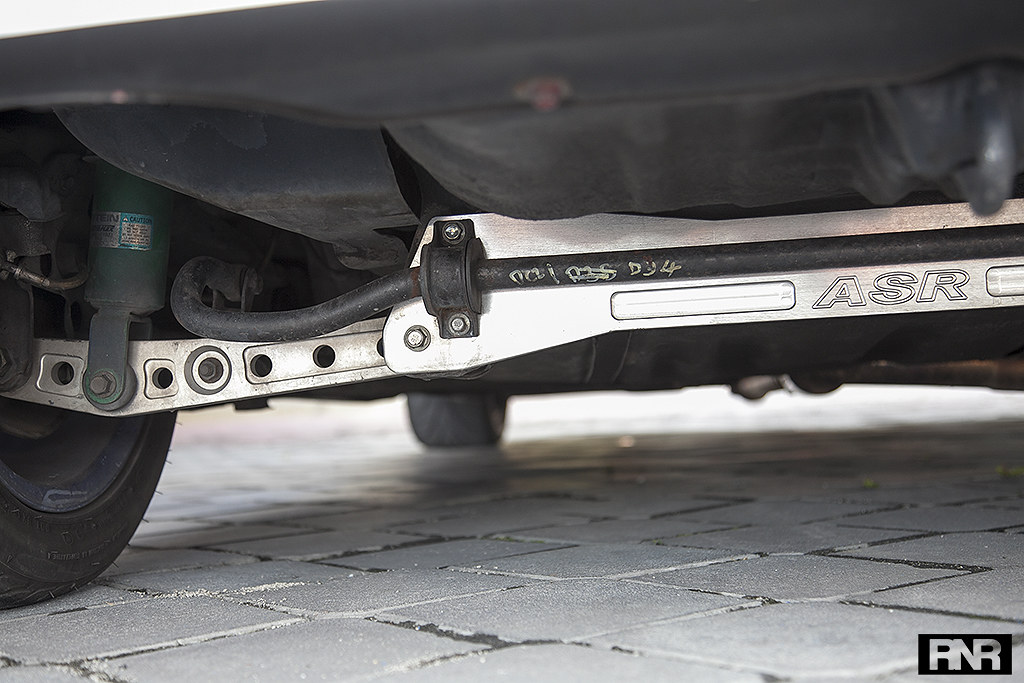 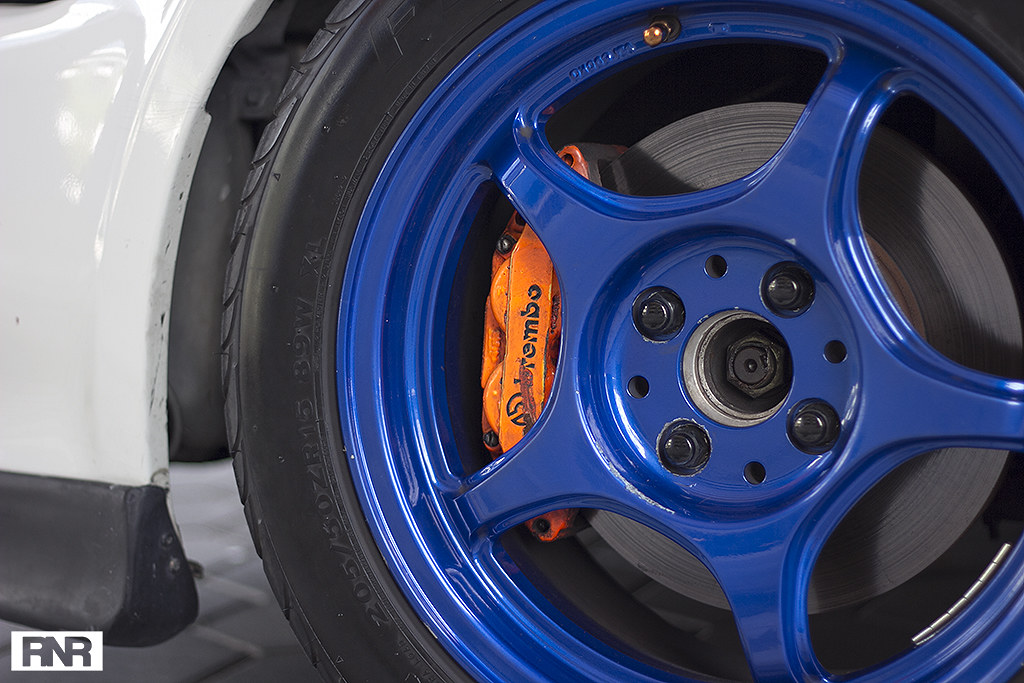 The custom exhaust in my opinion is the highlight of the car. Near towards the driver door, a retrofited throttle body is connected to the exhaust and is controlled by a trigger inside the car. Closed and the exhaust works like any street-legal exhaust (headers, catcon, resonator, muffler). Open the throttle body and it bypasses everything and provides the exhaust the shortest possible route out - from the side of the drivers door. Red-neck mechanical ingenuity at its best! 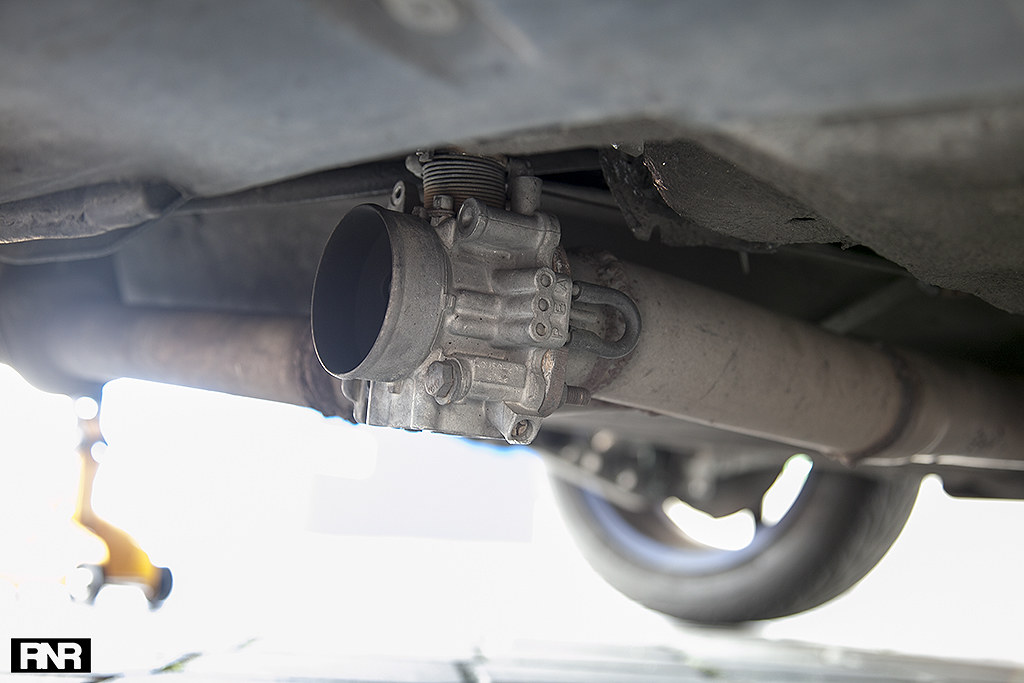 Although I've never seen Izrin go on track with this white screamer, I'm sure the Banshee is a hoot to drive like all small-engined lightweight pocket rocket Hondas. 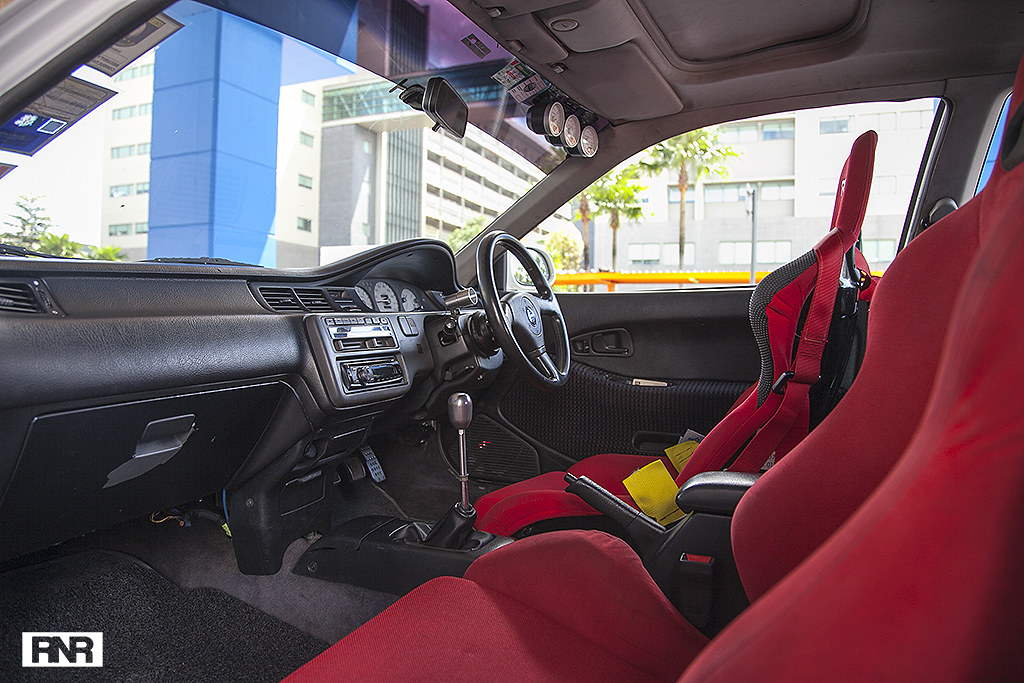 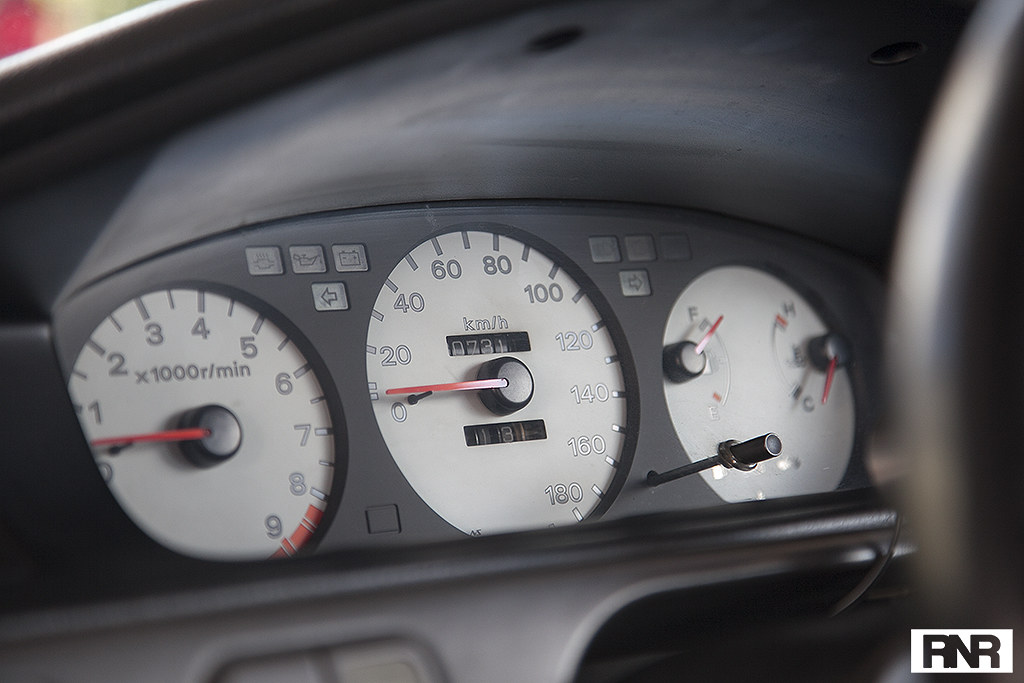 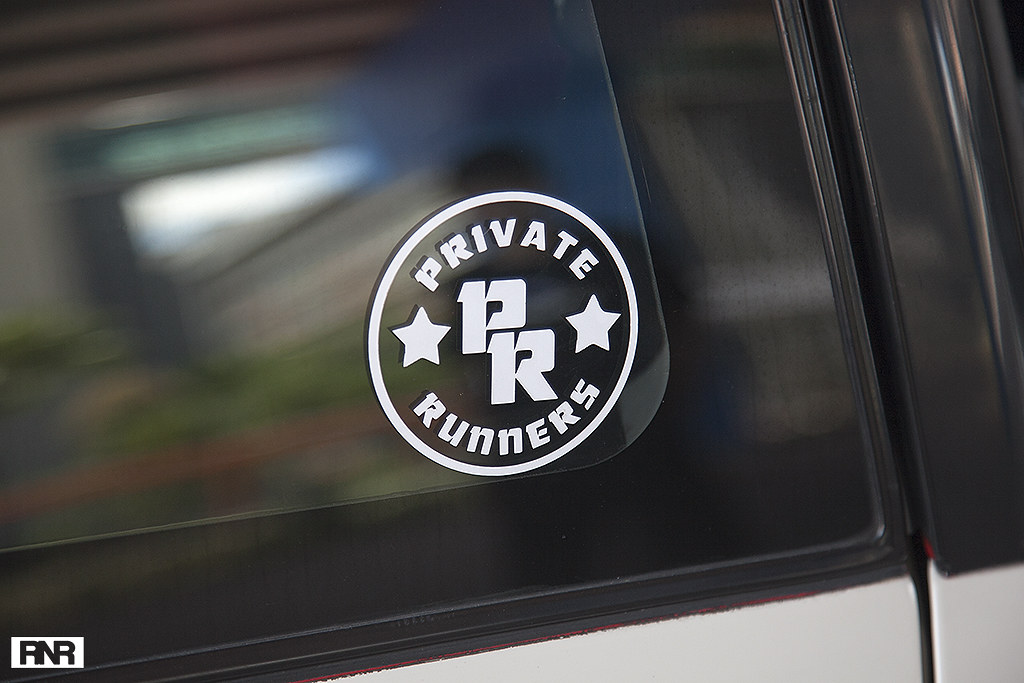 To be honest - I'm not a huge fan of VTEC technology. I'm all for forced induction and larger displacement, but there's no denying that Honda has come a long way with their VTEC technology and there are loads of awesome Hondas out there that are still able to give the big turbo guns a run for their money. 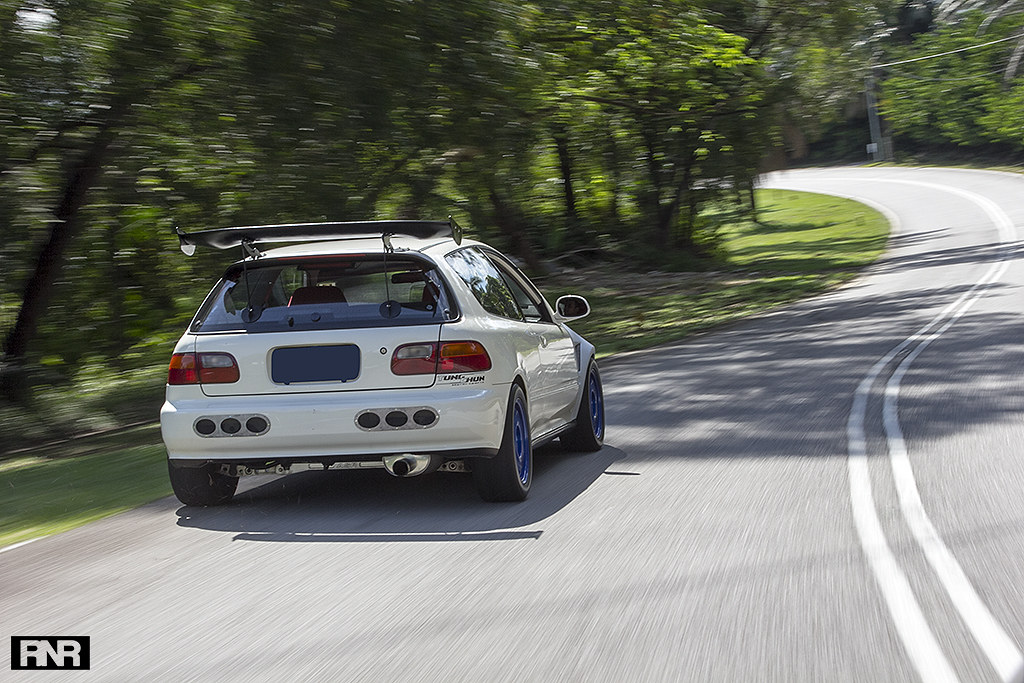