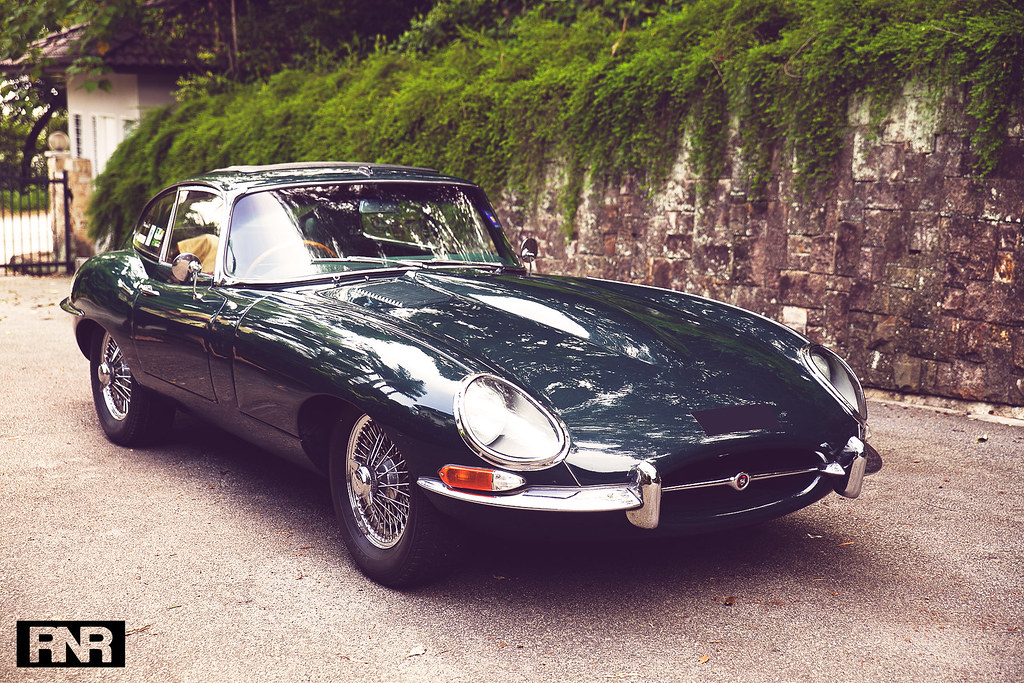 Said with my best fake British accent : Stout and scones guvnah? Or do you fancy a spot of tea?

What a beauty! Lived as an icon of the 1960s, the Jaguar E-Type is the iconic classic that looks fan-bloody-tastic and has the performance to boot. In its hey-day the century sprint was completed around 7 seconds and top speed of 150mph (241km/h thereabouts). In case you sneer at those numbers, this was achieved in the 1960s! 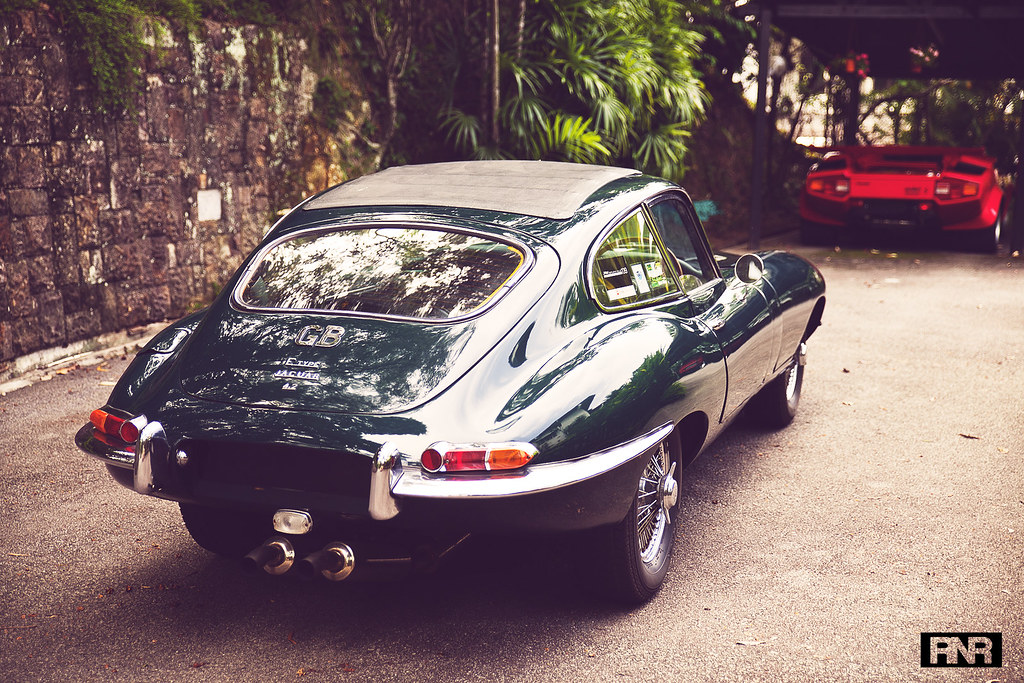 The quarter miled was achieved in 14-15 seconds and journalists hailed this car as "the easiest way to travel quickly by road" specifically referring to the 4.2L model. The series 1 E-type was first introduced as a 3.8L where the peak power was reached at 5,500 rpm. The first batch of E-types had flat floors and required special tools to access the external hood latches, but the design later changed to dished floors to allow for more legroom and the external latches were moved inside the cabin for easier access. This basically means the 1st generation of flat floor E-types were rarer and more valuable to collecters. 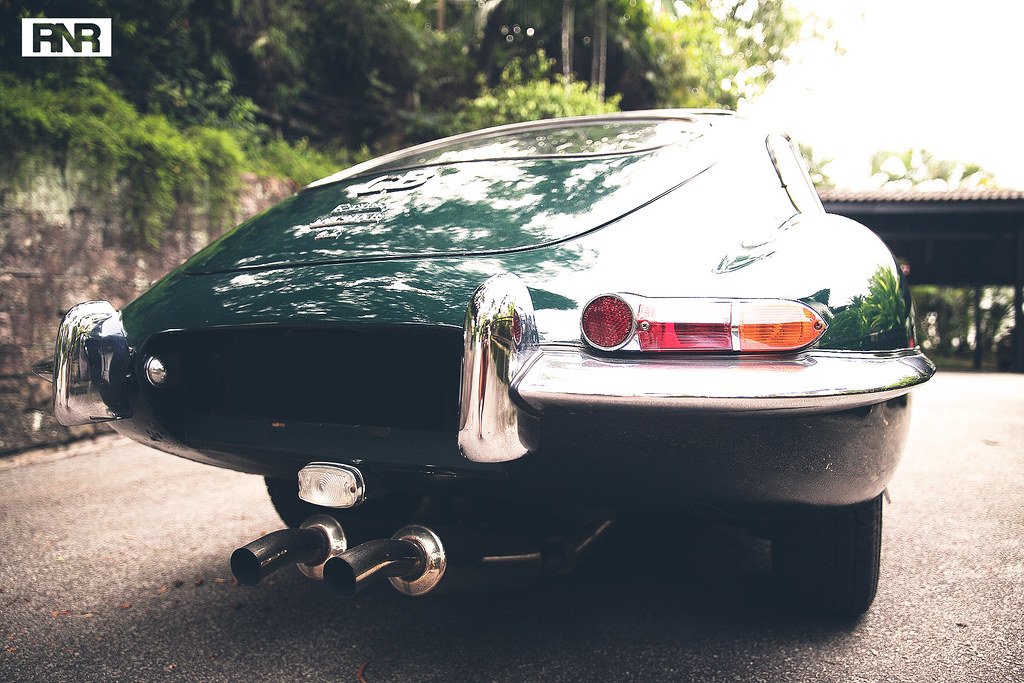 The later series 1 models came with 4.2L straight six engines since it produced more torque - 384Nm of gut wrenching torque! On a car that weighs only 1300kg that's plenty of button popping power! Oddly though, the century sprint and power output (265whp) was the same as the 3.8L model, the only difference was the increased torque - 325Nm to 384Nm torques. 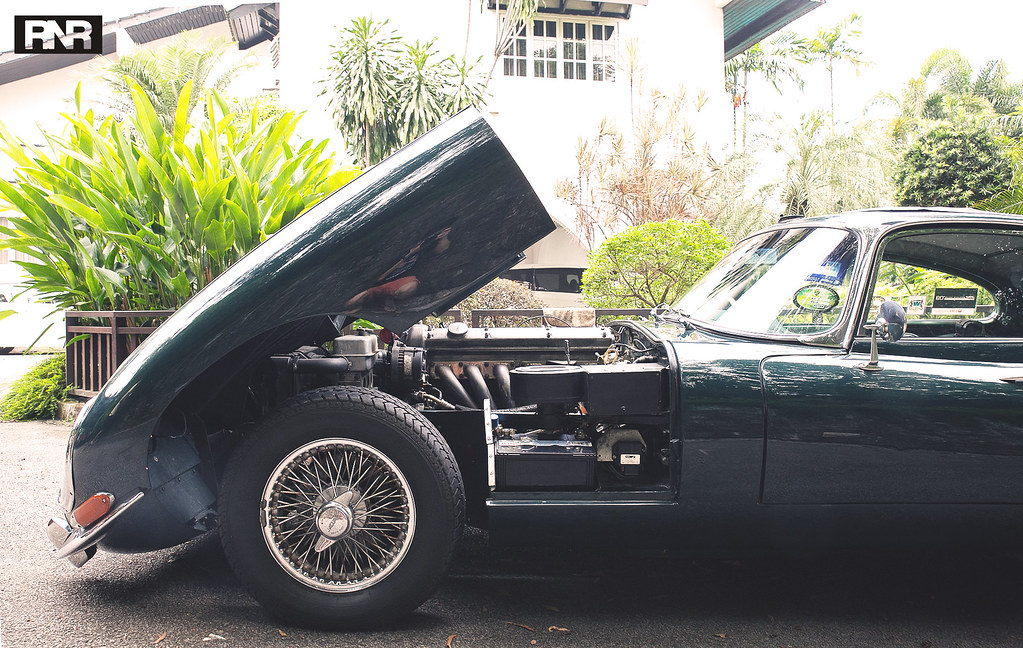 All E-type Jaguars (series 1, 2 & 3) were power assisted and all featured independant coil spring rear suspension, torsion beam front ends, and full disc brakes on all 4 corners. The odd suspension setup resulted in quite neutral handling characteristics due to it's long sweeping front and short rear end. Front inline-6 engine, rear wheel drive, light weight, a complete recipe for a fun handling car that looked as good as it handled! 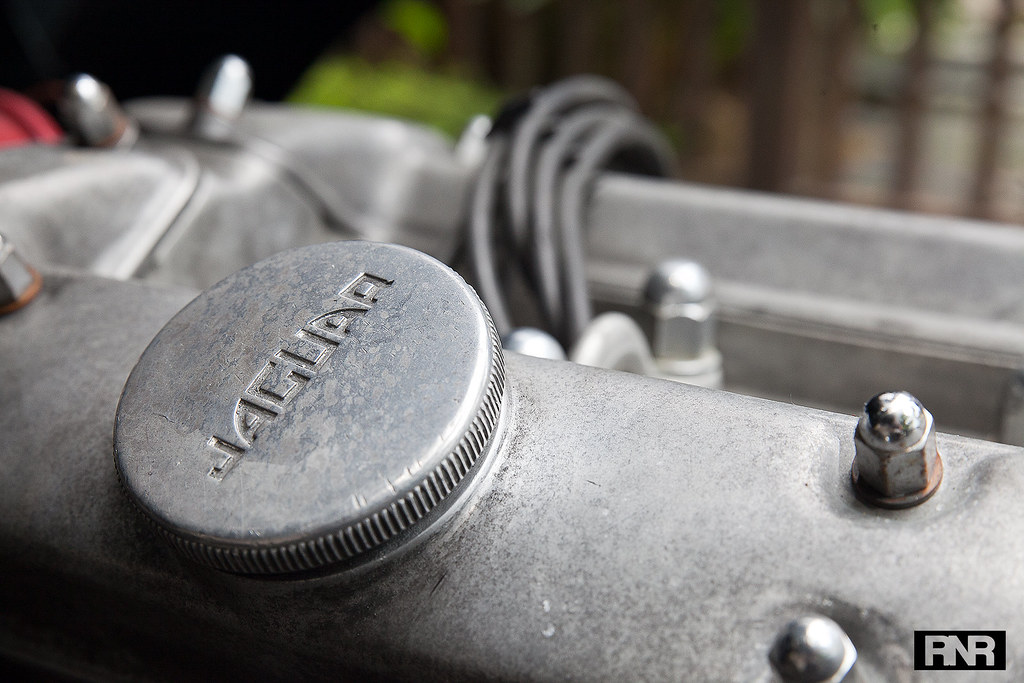 This particular immaculate example of the E-type had been converted to fuel injection and was sporting a MSD blaster coil. The owner told us that it was easier to live with since the original carburetors were harder to service since parts weren't readily available. That probably means the power figures aren't that accurate anymore, but who in their sane mind would put such an expensive classic on a running road? The owner tells us this car is his "weekend" drive. For cruising in cooling highland weather with the soft-top roof down. And perhaps a stop by the country side for tea and scones. The ultimate tool for relaxing and unwinding from a busy and stressful week. 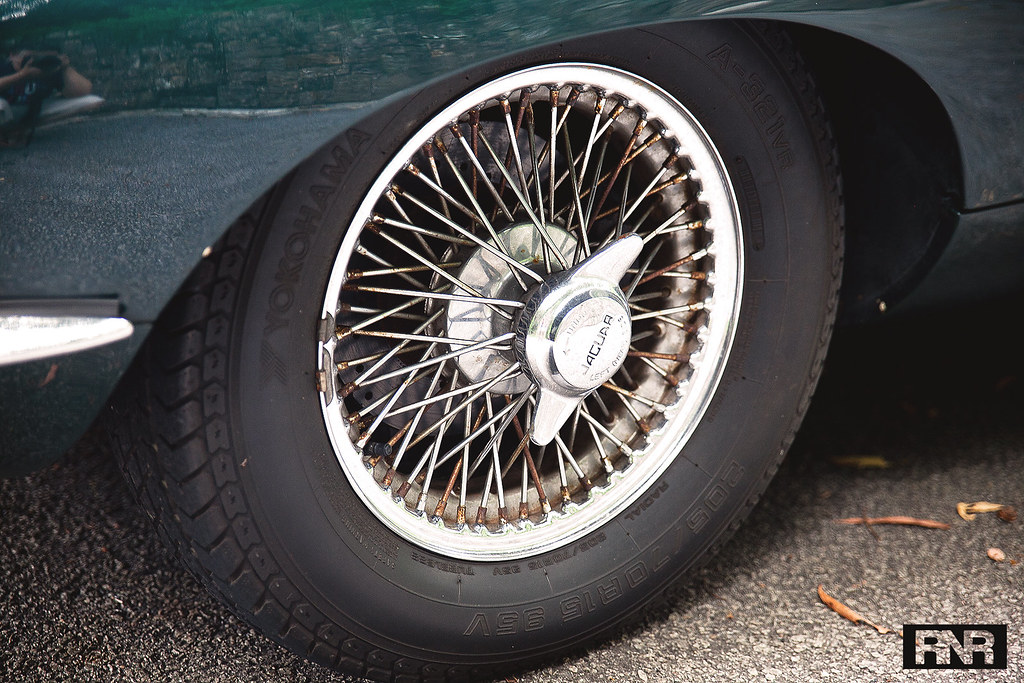 The E-Type used an unusual single wheel hub type of rim that required a special mallet to hammer out the single lock nut otherwise you'd risk damaging the beautifully crafted wheel. Vintage crossply 205/70/15 tyres were the original choice of tyre for Jaguar when they introduced the series 1 car, but with modern times the owner decided that a more modern radial tyres were easier to find and dropped the originality of the Dunlops and opted for more modern Yokohamas. 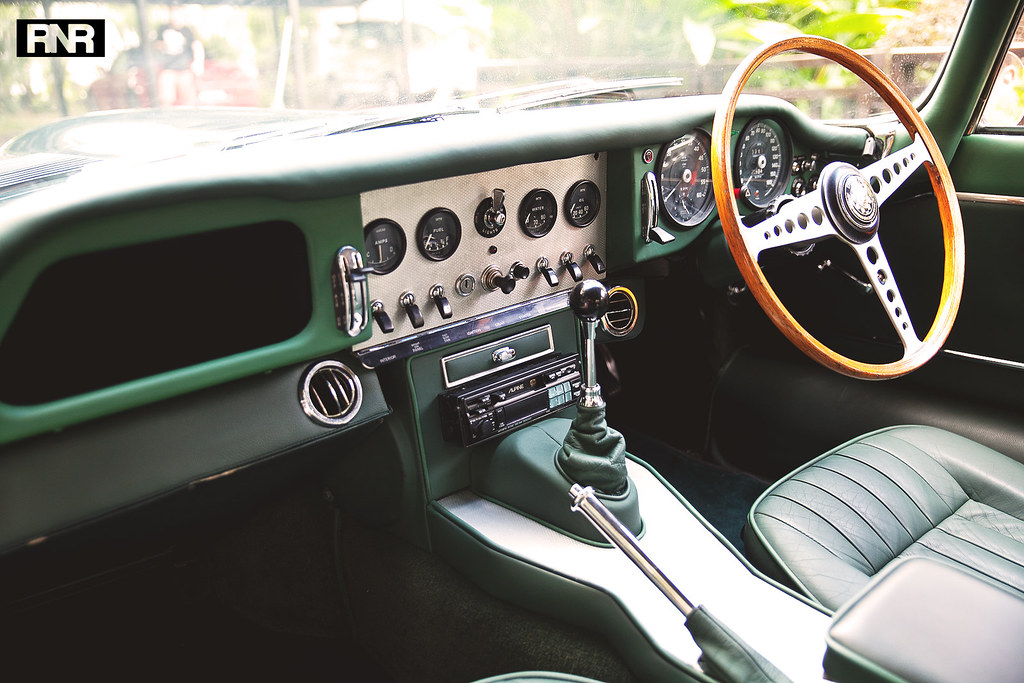 The interior of the E-type is exactly what you'd expect it to be - gorgeous. The oddly thin gripped 15" wooden steering takes some getting used to as it is quite flimsy especially since I have relatively fat hands. However once you get the car started, the steering is light and quite communicative but not lightning quick - which would explain the need for the enormous sized steering wheel. The dashboard may look spartan but everything you need is there - light switches, engine health gauges, key hole, choke, starter button... yes, a starter button. So if you thought your Pivot starter button was cool, you're 50 years too late son!

There's very little more I can say about this beautiful coupe. To hear it fire up, rev the inline-6 engine and fiddle with every latch and lever was a dream come true for ol' me! 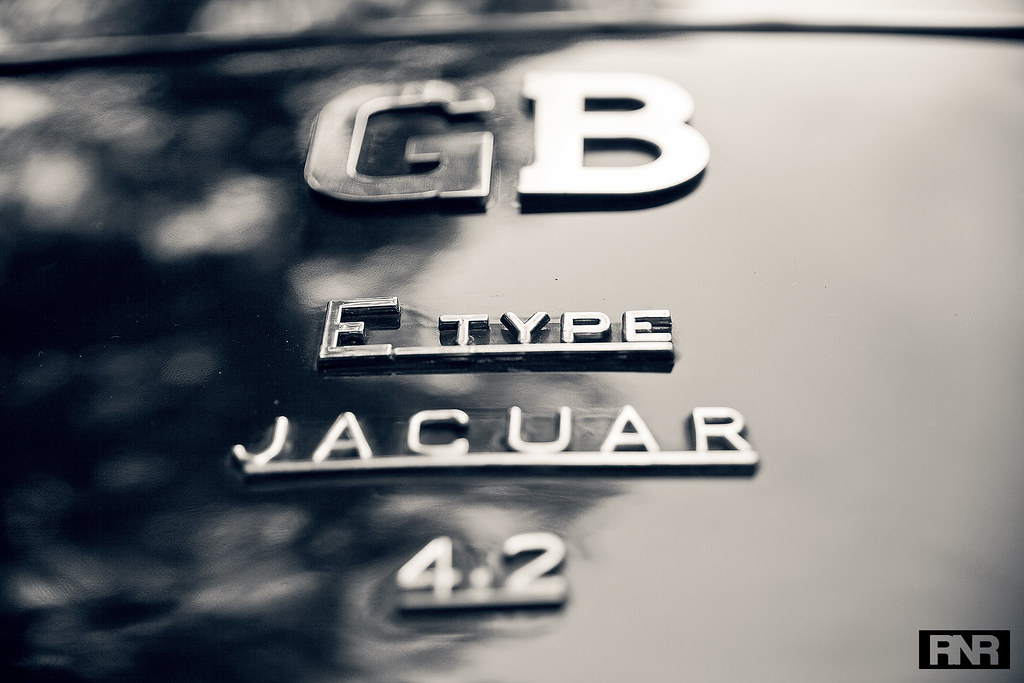 I very sincerely would like to thank my friend for letting me feature 2 of my childhood utmost favorite cars - this absolutely gorgeous gentleman racer and the original brute - the Countach. I never thought I'd ever get to see either of these cars up close in my lifetime, much less both of them! - Izso

The Heart
4.2L XK Inline-6
Modified to be fuel injected