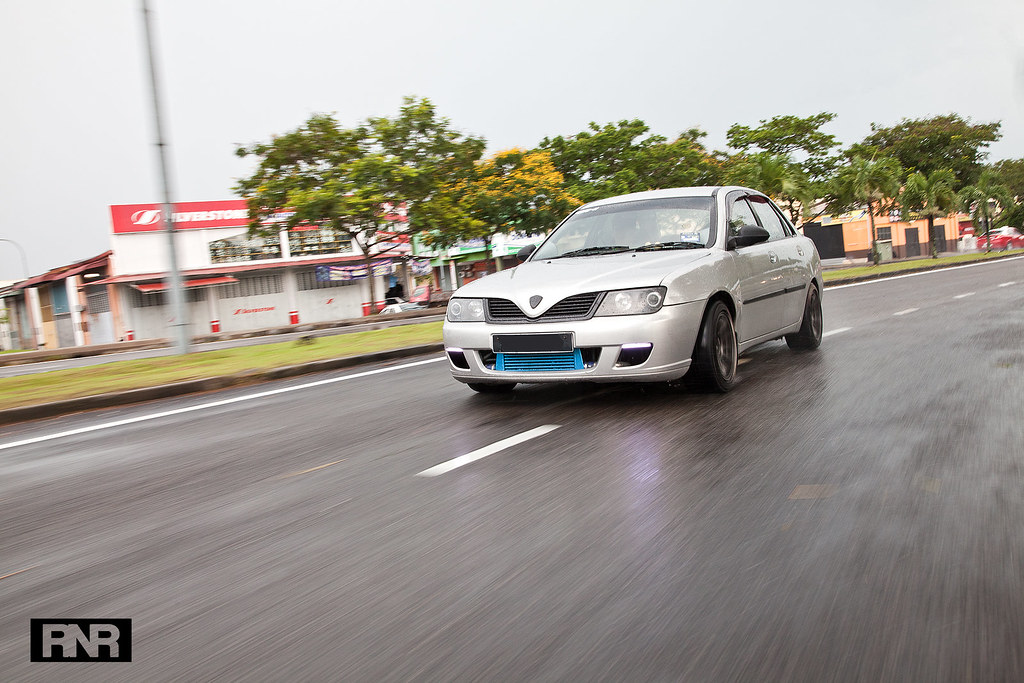 I've always been a huge advocate of DIY. There's nothing more satisfying than seeing something you made with your own two hands exceed expectations. And if you DIY enough, you'll start to distrust random mechanics and no one will be able to pull a fast one on you because you just know that A+B when installing C doesn't always result in D. Jin-Wei (the owner of this battle-worn Proton Waja) however was thrown into the DIY world, partially because of budget - but mainly because his friends wouldn't let him do it any other way. The infamous LowYat forum Mxstevens was there to guide and assist with the electronics and some mechanical aspects of the car, the rest was the owner and his trusted mechanic friends.

Mechanically, it would be easier to just scroll down to the bottom and look at the spec sheet than for me to explain everything in detail. Port and polish, oversized and low compression pistons frankensteined from the newer Proton Preve, balanced and blue printed, basically every internal mod needed for smoother acceleration and increased response was done. Fully DIY-ed with the exception of the tools and hoist, those were from the mechanic who lent the owner the space and tools to DIY the whole modification process.

There's a build-it-yourself standalone ECU available in the market called "Megasquirt" which is revered by enthusiasts all over because if it's flexibility, functionality and cheaper price. Mxstevens assisted Jin-Wei with the literal building and wiring of the ECU, but when it came to tuning the ECU : "Nah.. do it yourself. Easy!" 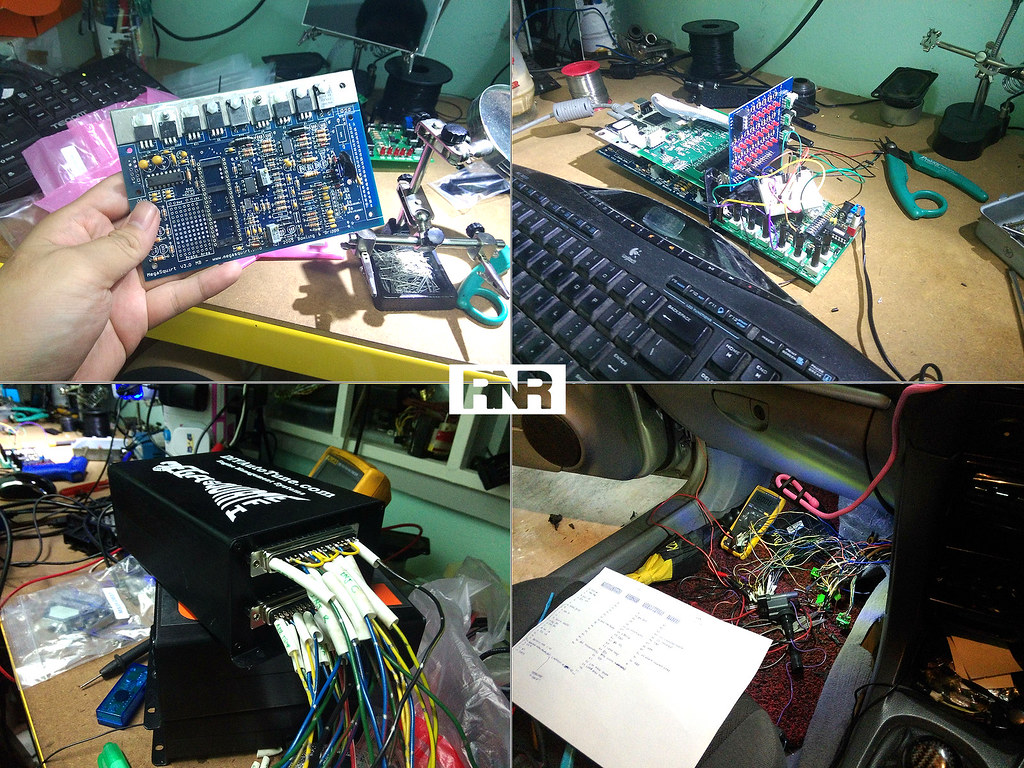 Personally I've never messed with a standalone ECU, so I honestly had no idea what it could or couldn't do. I've only ever used a piggyback and those are pretty rudimentary. Adjust air flow readings, adjust fueling, and essentially mess with the stock map to get optimum power from the car. That's a piggyback.

This is what Jin-Wei's Megasquirt can do :

Launch Control with ignition retard - What this does is it builds boost and limits the launch RPM. Upon launching, it retards ignition timing for 3 seconds to reduce power for more control and less wheelspin on launching. Makes glorious popping noises from the exhaust too.

Rolling Launch Control - If switched on whilst the car is rolling, it captures the RPM and it cuts the spark sequentially to limit revs to the captured RPM even under full throttle therefore building boost. Once switch off, the normal ignition firing sequence will resume with full boost.

Flat Shifting - A switch at the clutch was installed to allow shifting gears with full throttle, whenever the clutch goes in it cuts spark to drop the revs and maintains high boost.

Air-Fuel-Ratio (AFR) Safety System - This compares the target AFR map with realtime AFR input from the wideband sensor, if it runs lean it will shut down the engine.

A/C control - This turns the aircon compressor off when on full throttle/above certain RPM so the compressor doesn't rob the engine of power when it kicks in.

And people always ask why are standalone ECUs so expensive. 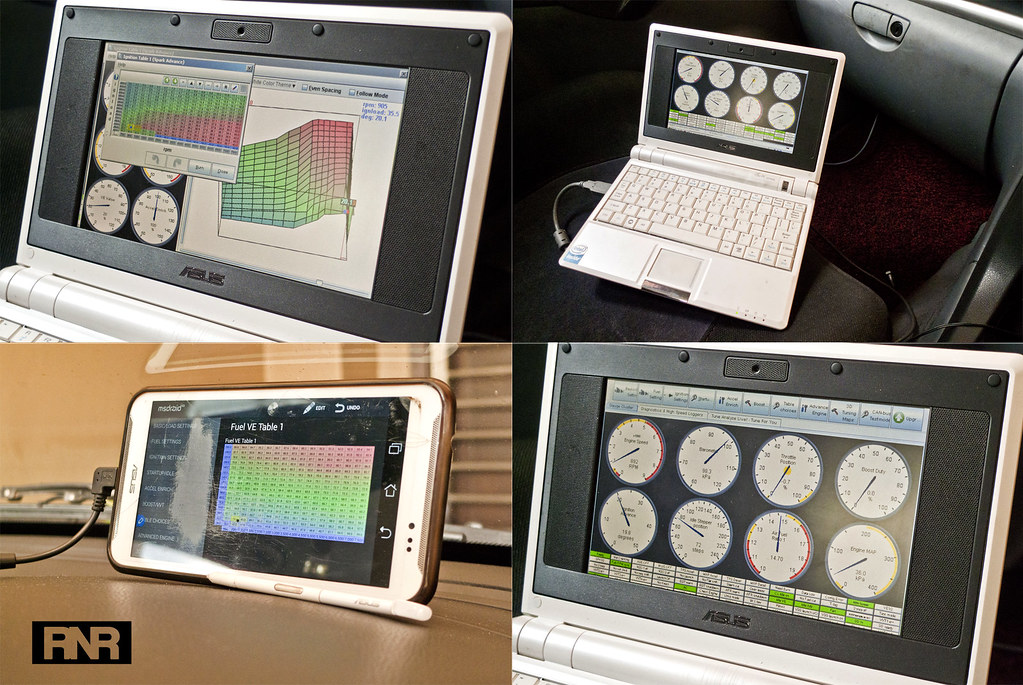 Jin-Wei did his own on-the-road tuning (Dyno tunes are expensive in Malaysia) and had a few catastrophies along the way due to overzealous adjustments resulting in the engine being rebuilt twice. But he finally prevailed and got a pretty decent tune now on the car. He says that it's not ideal, but at least it won't disintegrate another piston or two. 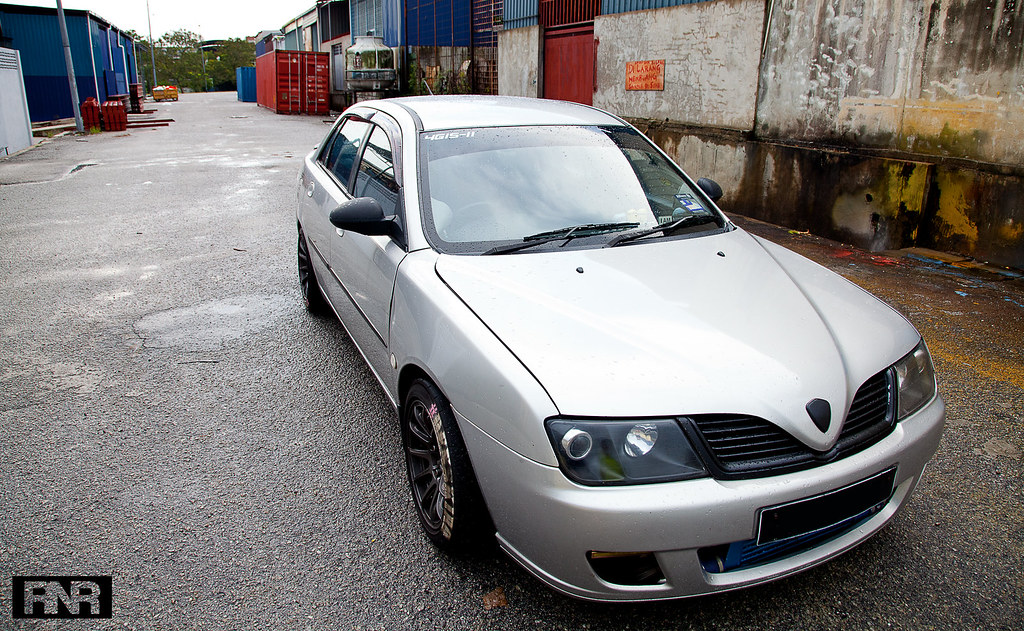 The Proton Waja has been around for a while now, slightly more than 10 years. But enthusiasts still select the Waja for it's 4G18 1.6L engine and sturdy chassis. The other reason is that it's a lot newer than the venerable Wira which shares the same design as the even older Mitsubishi Lancer. Why go for old when 'new' works just as well? And spare parts are readily available everywhere at quite cheap prices. If you choose the right spec, the Waja comes with full leather interior, fancy Xenon headlamps and LED rear tail lamps. 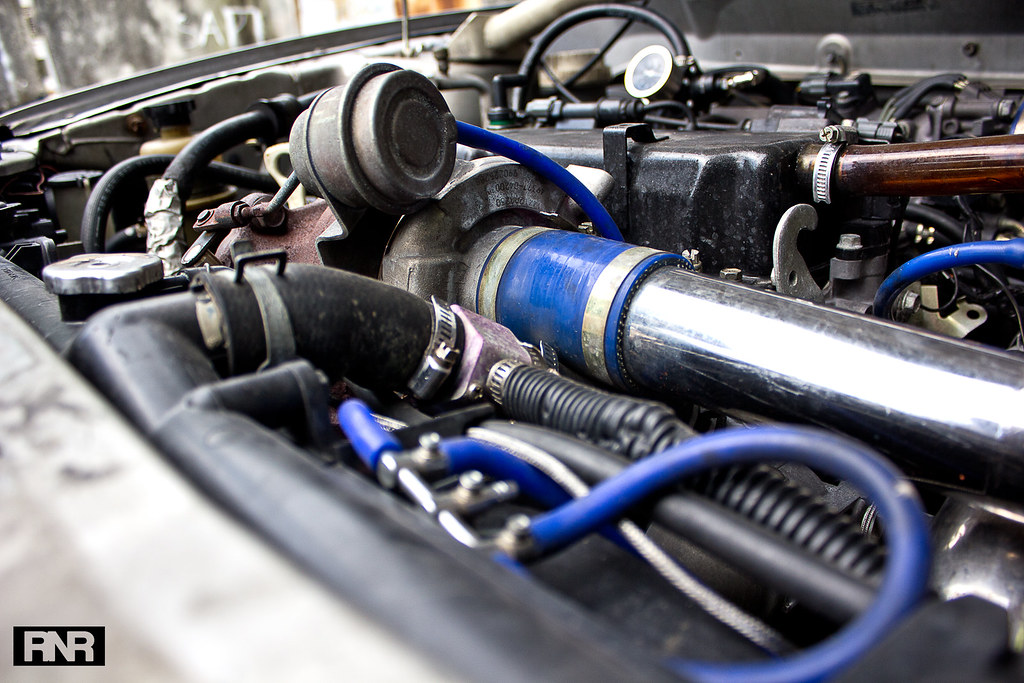 Whilst the engine bay is not exactly the prettiest sight, it's fundamentally sound and that's what everyone really cares about - function. Though personally I think it could use a full on engine cleaning. 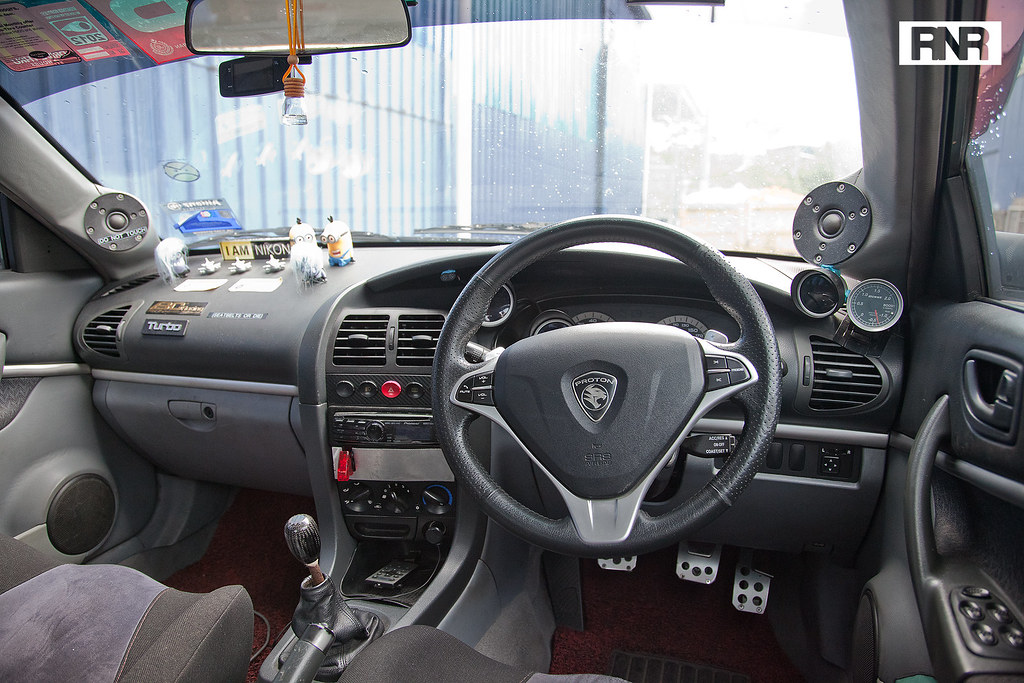 In the cabin, you're bombarded with measurements, readings, visual stimulation to keep anyone who drives the car awake. The Wajas dashboard design is wrapped around the driver so everyhing is angled towards the driver. Add in a few psychedelic coloured meters that keep you informed on the health of your engine and you'll never be bored. Note those gigantic tweeters too - previously top of the range Scanspeak tweeters. My question to Jin-Wei : Why do you need music when your exhaust and blow-off are so stupendously loud? Give me those tweeters!!! 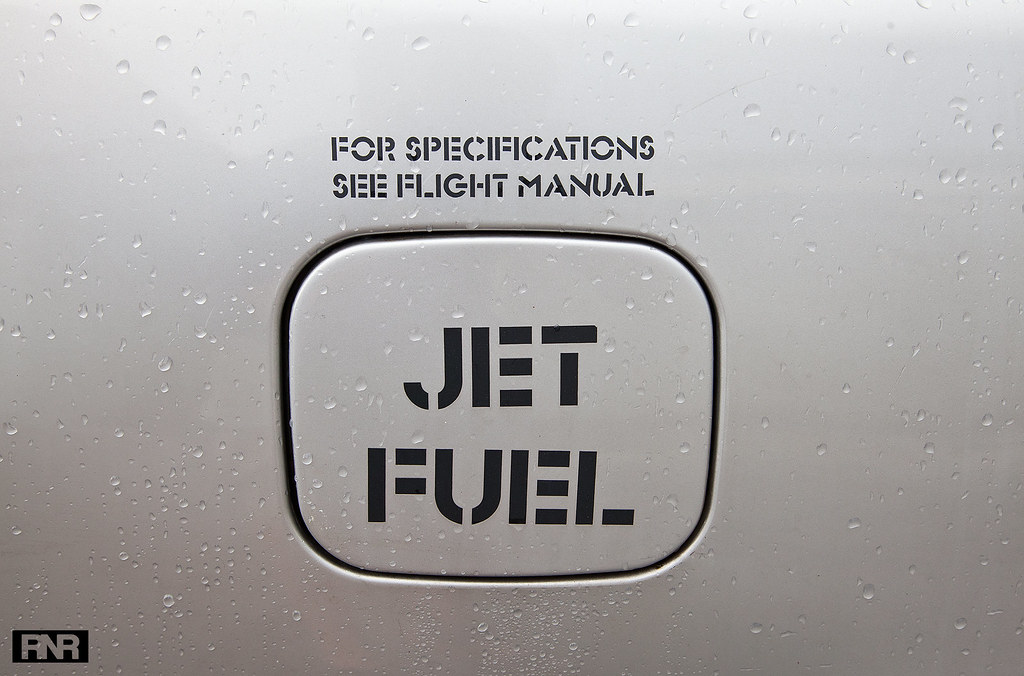 Having rebuilt my old Wira myself with 2 other friends, I understand Jin-Weis feelings and attachment to his car. I took 6 long months (because I only worked on my car on weekends) to build my car up and after 9 long years, I grudgingly and very unwillingly sold the car to replace with it with a family oriented car. Jin-Wei took almost the same amount of time to build his Waja and after spending a couple of hours with the guy, it's plainly obvious that he's obsessed with his project. Always showing photos of the build on his phone, talking about how things exploded in his face, how he resolved the issues and learnt everything the hard way, everything he said only confirmed his passion for his car. 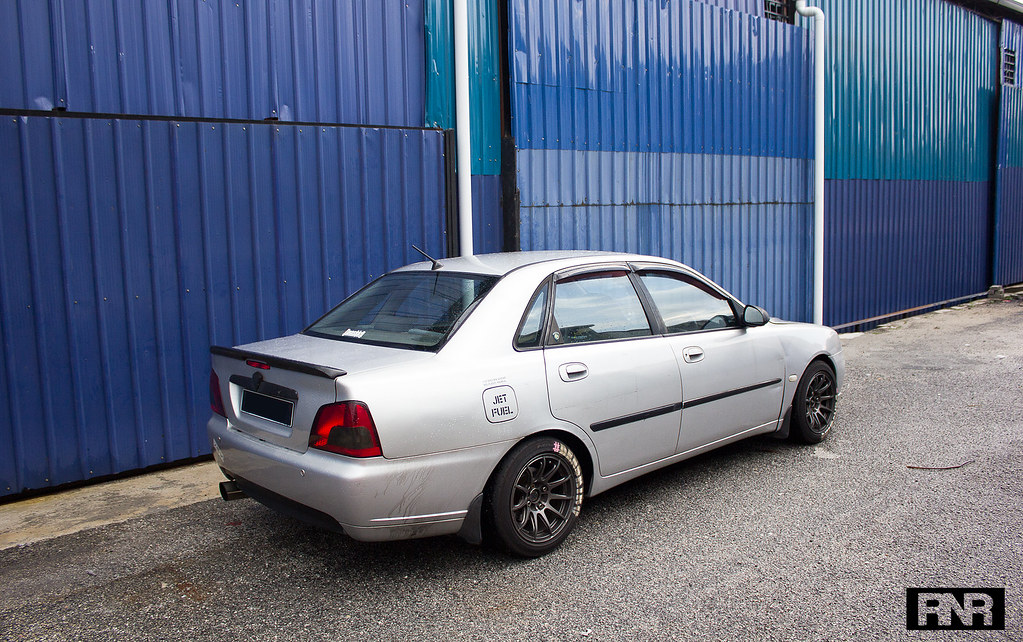 Whilst it's not going to win beauty awards or break record track times (actually, it probably could to that), car enthusiasts will agree on one thing : It's not about what you drive, it's about how it makes you feel.